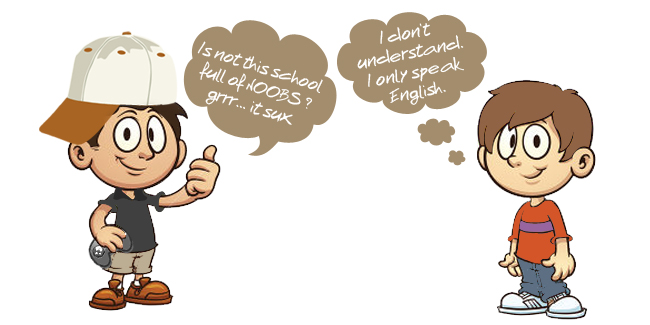 Me: Isn’t Sophia a total NOOB?
Emma: What?
Me: Totally GHOSTING her!!
Emma: I am so confused!
Me: SBT!! It’s a video game thing

This is my IM conversation with a colleague a few days back. Being an ardent gamer myself, gaming slang has become my second language that sometimes I completely forget not everyone understands this language.
With so many people playing all these MMORPG’s and MMO’s, BTW these are not slangs but video game genres (Massively multiplayer online role-playing game and massively multiplayer online game likewise), game slangs have totally arrived in mainstream language. Games like War World of Warcraft, Final Fantasy, Lord of the Rings, Age of Conan have created their own lingo to interact with thousands of players. Even if you are not hooked to these games, it’s unlikely that you will never cross path with these video game slangs. So let’s dive in this newfound world of popular slangs.

Grinding: Playing for an insane amount of time in a game to earn reputation for ones avatar. It is mostly found in weaker games where player have to spend too much time to increase their strength or power.
Easter eggs: They are these awesome irrelevant features hidden by developers for the players to unlock. Most of the time they are totally unnecessary for the gameplay, but gamers do get an ego boost in finding them.
Boss: he is the ultimate bad guy of the game. Must kill the boss before can progress in the game. This term is widely used in real work life scenarios for describing malicious employees in the work place.
Glitches: Bugs found in the gameplay are slanged as glitches. Like if you get struck on a wall, it is referred as a glitch. This popular term is often used as the shortfalls encountered while doing a work.
Farming: you are gathering supplies for your game
AAA: An “AAA” title is a big title in gaming usually backed by huge companies and heavy marketing budgets.

AFK: Away From Keyboard. To suggest you are not playing the game for time being. Though massively used now to mean you are currently not working.
GLHF: Good luck Have Fun. To congratulate a fellow player
NPC: Non player Character. This is the game controlled character, not controlled by a real player
MOB: Monster or Beast. Mob must be killed to progress in the game.
PvP: Player vs. Player. A game where you have to face off against another human player as oppose to a game controlled character.
DLC: Downloadable Content. All the content which can be purchased like power-ups, costumes, new levels, characters etc. Loads of money is spend on DLC
RTS: Real Time Strategy. It’s a game where everything from strategizing an attack or defend happens in real time or in the moment.
GTG: Good to go. I am all set.
DPS: Damage per Second. This is how much you can literally damage someone else in a game per second.
FFA: Free For all. All the stuff is up for grabs for free for the member in your group.
BRB: Be right back. You will be coming soon.
PUG: Pick up group. It’s the act of picking up people to make yourself a group .It’s Not necessarily you know these people.
TLDR: Too long, didn’t read. Rather clear right? Never post a TLDR messages on your forum.
OOC: Out of character.it describes that you are not using your online game avatar to chat. For a change this is real you who is chatting.
IGM: In-game name. A fake name used to name your online Avatar.

N00B: Newbie. It refers to a person who is new to online gaming, or perhaps to a veteran player who is just bad at playing. So if you are called a Noob, it’s time to upgrade your playing skills.
Owned: Used when you get badly beaten up in a game
Ghosting: is used when you are watching another player to get an advantage by overseeing the player’s moves.
Grrr: is used to depict sheer anger over the game
FTW: For the Win. It means whatever you are uttering about is simply awesome.
Rez: Resurrection. You died and you need a fellow player to give you a life.
Woot! : This means you are unending happy about something.
Sux : Sucks. Self-explanatory, inorite?
Flagged: to show your character is no longer safe.
Camper: Players who just rove in the game, without playing any real move. Camping is frowned upon, so be sure the last thing you do in a game.
Spammer: a Person who is continuously pulling the trigger of the gun. Any killings made by them are more of a result of luck than any hardcore skills.
Trolling: it’s the act of posting offensive statements to get someone’s instant reaction. Trolling is more often criticized by the gaming community.
Mats: Materials you need to build something.one night when I was heading out from work, I mentioned to my friend I need mats for dinner, meaning cheese and bread.
So have you ever Flagged off, or declared a NOOB? Do tell us your favorite game slangs which you gives you woots ! Till then, GLHF.